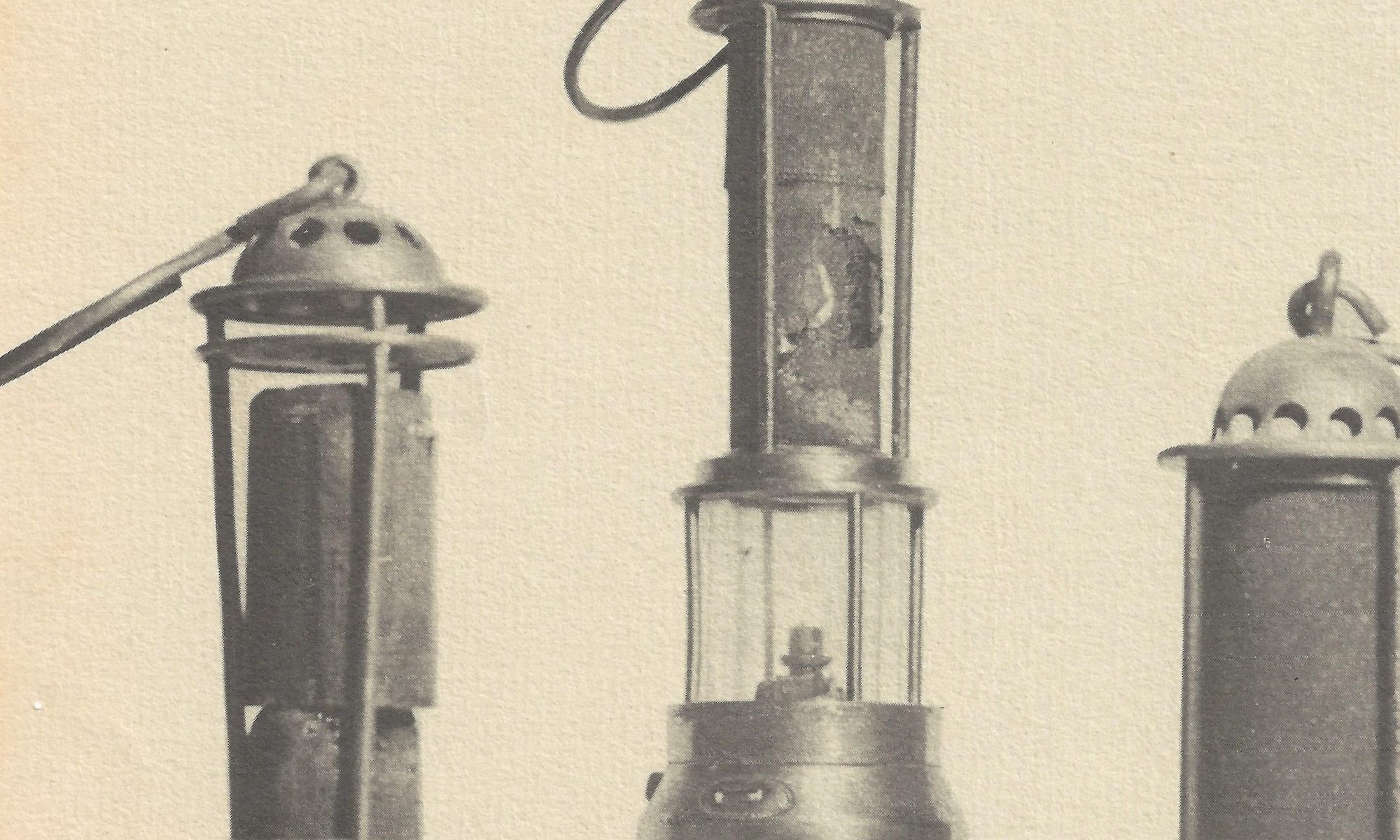 Miners lamp information and their development from the Davy Lamp. Our flame safety lamps, first made in 1873 incorporated the self extinguishing system patented by Joseph Prestwich, the driving force of the company in the Victorian era. Deputies Lamps were carried in all coal mines in the UK. In this article you will find detailed information on the most common Protector Lamp Type’s of mining lamps including the Type 6, SL or Workmans lamp, GR6S Garforth, Type 1A, Type A1, Type BL, MC40 and CT33A.

Read a more detailed history of Protector Lamps development in the link below;

The Type 6 is a flame safety lamp used for gas testing in coal mines. This miners lamp will safely burn methane/firedamp without causing an explosion.

It is a development of our earliest safety lamps, first made in 1873, and incorporates the Protector self extinguishing system developed and patented by Joseph Prestwich, the driving force of the company in the late Victorian period. It was tested and approved for use in mines in the 1940’s.

Protector Type 6 lamps emerged in 1929, these are lamps with a flint ignition device which in the prototype was activated by rotating the reservoir. However, an improved flint lighter was designed which used a striker key and was much simpler in construction. This system was patented (UK 344812/1929) and was the basis of the system used on Type 6 lamps today.

Following Nationalisation in 1947 it became the approved lamp for all UK Coal mines which were operated by the Ministry of Power under the Labour Government. As the State did not want to create a monopoly supplier they also introduced lamps from Wolf and Thomas & Williams.

The GR6S is a development of the Type 6. It was tested and approved for use in mines in the 1960’s.The first prototypes of which two still exist, were made in 1964.

A Government scientist named Garforth invented a more accurate system of gas sampling where by gas was injected directly on to the flame. This was incorporated into the Type 6 design, and was also made available in other lamps.

The GR6 went in to main steam use in the late 1960’s and gradually replaced the Type 6. Following issues with the brass wick tube corroding a stainless steel tube was introduced and the lamp became the GR6S. It is still used by Deputies today to test for firedamp.

These were designed for the GPO (General Post Office) the forerunner to BT. They were used from the 1960’S to 1998 to test for oxygen deficiency in tunnels and manholes.

They are a flat wick lamp burning paraffin or lamp oil and are very easy to use. Also good for use on boats.

They are still used in the Royal Navy Dockyards for testing for bad air in ships holds and on submarines.

The pictures below show the assembly of the Protector Lamp Type SL glass plate and lighting assembly, with detailed photographs of the position of the screws, platinum wire and insulating washers 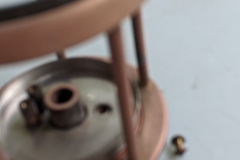 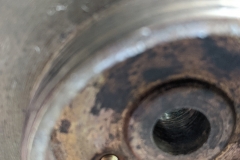 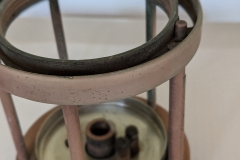 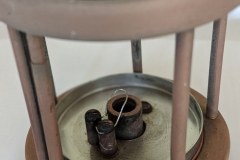 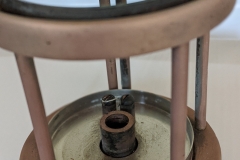 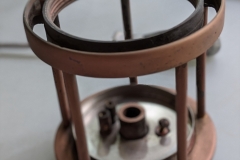 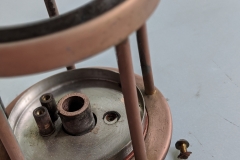 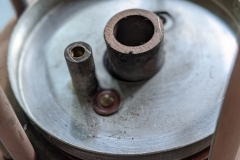 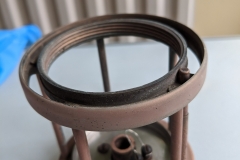 The SL (side lit) or Workman’s Lamp came into widespread use after the Great War. It had to be lit in the Lamp Room by an electric current as Workmen were not allowed to relight underground.

The iron topped SL (side lit) also known as a Workmans lamp. Workmen were not allowed ro relight underground. The lamp was lit in the lamp room or at an underground lighting station. The lighter was a green electric box about 9″ square. A 4/5 volt current is applied to the tin glass plate and the vessel, the circuit via several insulating washers passes through the platinum wire adjacent to the wick. When current is applied the wire glows red lighting the Colzalene fuel. Look for a 2 digit number stamped into the brass ring around the bottom of the glass, 57/ is made in 1957.SL’s were around from the 1920’s through to the early 1980’s. The iron tops were replaced in the 1960’s with stainless steel.

Concurrently with his work above, J Prestwich experimented amongst other things, with lamps that incorporated electrical lighting features. This meant that the lamps could be assembled completely before lighting. The first successful model was the BL (bottom lit) lamp described in UK patent 3785/1893. This was a spirit (Colzaline) burning lamp which could be lit by applying a low voltage (2v) current across a platinum filament adjacent to the wick. The current was applied to the frame of the lamp (fig. 5). This was a very successful lamp and was produced up to the 1950’s.

The CT33 was developed as an alternative to electric lighting;

In the 1930’s electric lighting was being used increasingly in mines, which easily surpassed flame safety lamps in brightness. Consequently new standards of lighting were applied and new regulations came into force-Safety Lamps (Conditions of Use) Order 1934-under which safety lamps which were considered bright enough to be used continually at a coal face fell into a new category-Schedule A. Most of the flame lamps in use at this time did not fit into this category and were put into another category-Schedule B. Lamps in this latter group could only be used by workers not at the coal face nor loading stations, and , if they were fitted with self contained lighting devices, could only be used by officials. This led to more research and the development of high candle power (HCP) lamps which would fit into Category A, and a number of firms produced such lamps. Protector themselves developed a series of lamps the most successful of which was the type 33A (fig. 9 and No. 97 in collection). The CT33A was a Mueseler type lamp with an inner glass combustion tube suspended from the chimney. Production of this lamp started in 1935 and went on into the 1950’s.

A high candle power (HCP) lamp developed for Manchester Collieries, these were the mines owned by the Bridgwater Estate around Worsley Delph where the underground canals linked to the Bridgwater Canal.

The advent of Schedule A high c

andle power lamps did not prevent the further development of lamps which now fall under Schedule B and a number of new lamps were developed and manufactured by Protector. The first of these, in the 1930’s was a lamp designed for Manchester collieries which was designated type MC40 (fig. 10 and No 89A in collection). This was a bonneted Marsaut lamp which had the frame fixed to the reservoir and the bonnet was locked by a magnetic lock on one of the pillars. The lamp burnt heavy oil which necessitated the use of a high tension lighter. These lamps were made until the 1950’s

The picture below is a cutaway version of the Type 6 lamp.

A brief survey of the development and manufacture of miners safety lamps, by Frank Johnson