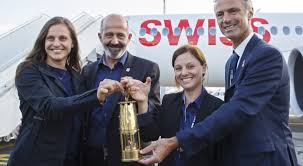 We are the experts on transporting flames on aircraft. Our Olympic Flame Lamps have carried the Olympic Flame and the Holy Fire (Святой огонь, Sfânt foc) on commercial and military aircraft for over 30 years .

The Olympic Flame is carried in our Flame lanterns, developed from our miners lamps, on planes and when it is not being carried in the Olympic Torch. For each Games a fire is lit at Olympus near Athens and is then flown to the host country.

The Holy Fire is transported by plane to many Orthodox Communities around the the world during the Easter period each year in the same type of modified lamp.

The Holy Fire (Greek Ἃγιον Φῶς, “Holy Light”, Russian; Святой огонь,  Romanian; foc sfânt ) is described by Orthodox Christians as a miracle that occurs every year at the Church of the Holy Sepulchre in Jerusalem on Great Saturday, or Holy Saturday, the day preceding Orthodox Easter.

If you are involved in a Torch Relay or Flame Transfer please look at the videos below which will show you everything you need to successfully transport and transfer a flame;